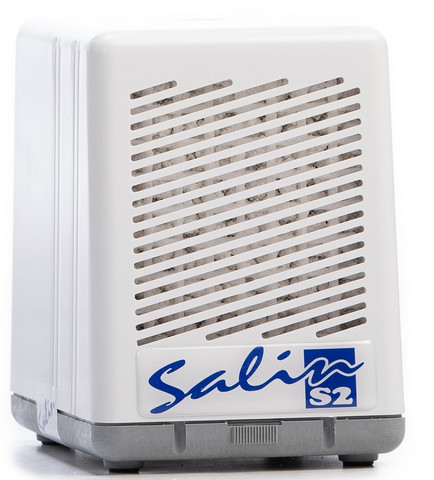 SATISFACTION GUARANTEE! You will notice the results in two weeks. If you're not happy, you can return the device free of charge within 3 weeks from ordering.

Salin S2 releases small therapeutic salt particles into the room air. The filter in the device is equipped with sodium iodide and its use is equivalent to staying in a salt room.
This lightweight, portable and energy-efficient device features a powerful G4 pre-filter that removes 98% of airborne contaminants, including mold spores and bacteria. The device cleans the room air while you sleep. Salin S2 has also been found to be very helpful for people who do not have respiratory problems but want to sleep better, reduce snoring and improve their immune system. The device also reduces the smell of tobacco as well as other unpleasant odors from the room.

Breathable salt particles from the room air penetrate deep into the lungs all the way to the alveoli, clearing mucus, killing bacteria, reducing inflammation and moisturizing the airways. Salt aerosols also have very good effects on indoor air purification due to the bactericidal property of the salt and the high content of negative ions in the salt, which adhere to positively charged room dust, bacteria and viruses.

Salin S2 helps with airway inflammation by cleansing them and purifying the air we breathe. It also prevents respiratory diseases, protects against the flu and colds, while keeping the airways hygienic. It increases resistance to mucosal infections and allergens.

It is a very safe treatment for all ages, including infants and pregnant women. It does not interact with any medication. The device can also be used for respiratory problems in pets.

The device is easy to use. Plug it in for a night, for example. Its quiet sound will not disturb your night's sleep.

Most medications prescribed for respiratory illnesses only relieve symptoms. Many medications also have significant side effects, especially those that contain corticosteroids.

Salt therapy can be used as a natural alternative or as a complementary treatment. It has no side effects and has been shown in clinical trials to achieve significant results in the recovery from respiratory diseases.

The Salin salt therapy device has been shown to be very effective in helping you if you have any of the following conditions:
* Asthma
* Pneumonia
* COPD
* Cystic fibrosis*
Bronchitis (inflammation of the bronchi)
* Sleep Apnea (The salt therapy device is not suitable for use at the same time as the sleep apnea device. We recommend the salt therapy device for sleep apnea users only for day use.)
* Allergies / hay fever
* Snoring
* Sinusitis (including sinusitis)
* Cold and flu
* Ear infections
* Post Nasal Drip (nasal congestion)

Salin S2 has Valvira's approval as a medical device.

RECOGNITIONS AND AWARDS:
* Registered by the Romanian Ministry of Health.
* Medical device, class I, conform MDD 93/42 / CEE
* Manufacturer with the system of quality management certificate ISO 9001: 2015 and ISO 13485: 2012.
* Silver Medal Award at the Salon Internationat des Inventions, Geneva, 2002.
* Gold Medal Award at the World Exhibition of Innovation, Research and New Technology- EUREKA, Brussels, 2002
* Published on docguide.com further to the selection at the 24th European Congress on Cystic Fibrosis, Vienna, 2001.

"In the evenings about an hour before the boy went to bed, I turned on the device and let it run overnight. At first the effects were clearly felt in the room air, the device cooled and refreshed the room. After a few weeks the boy started sleeping without coughing the medication was only counted in the opening spray to be used when needed. At the moment, the boy no longer has any medication at all. Incredible device! I can warmly recommend it to anyone especially suffering from respiratory problems. " -Tanja H, Turku

"I have had chronic sinusitis for about thirty years. I have had to be on the operating table 9 times. Last time in early April 2019. My friend introduced the Salin Plus device in mid-May and offered it for trial use. The first three weeks have shown that my airways have remained open "The first impression of the Salin Plus is really positive." - Heikki Kolehmainen, Turku

"I talked to my mother on Saturday and she said the salt machine has worked well and she has been able to reduce the medication a bit. The amount of mucus has also decreased. She promised to talk to her sister who has the same effort and recommend the device to her as well." - Pursiainen J.

"The device was on all night and in the morning I woke up without a runny nose. The air travels to my lungs painlessly. I'll take the kids to the floor next to me to sleep next night."