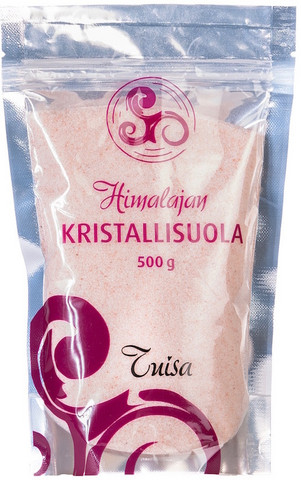 The crystalline salt of Tuisa Himalayas is 100% natural salt. Does not contain anti-seize agent.

The crystalline salt of the Himalayas was formed millions of years ago when the primordial sea dried up. The remaining salt was trapped in the lower parts of the Himalayan mountains that formed as a result of the collision for millions of years, and thus it has also remained very clean. As a result of the pressure caused by the compression, the structure of this natural salt has crystallized. Due to the crystallized composition, it is almost jelly-like in its soluble form and is therefore absorbed in our smallest cells in our body and can be efficiently utilized by the body. The perfect natural composition of the crystal salt takes care of several different functions and balance of our body. neuronal communication, maintenance of acid-base balance, and regulation of osmotic pressure. Prevents muscle cramps as well as uneven heartbeats and cleanses the lungs.

However, crystalline salt is not found everywhere. Most of the salt in the salt mines is dark gray rock salt, but here and there you can see reddish-white veins from which the purest crystal salt is mined by hand. Because of its color, the crystal salt is also called the rose salt. Because crystal salt is a natural resource with few occurrences and mechanical extraction impossible, it is more valuable than normal table salt.

Commonly used table salt is a highly pruned version of natural salt and contains mainly only sodium as well as chloride, as with the industrialization the other elements contained in the salt began to be considered as residues. The separated minerals are sold separately at a high price. As pure sodium chloride, salt does not occur at all in nature. Compared to unprocessed natural salts, table salt has a bitterer and sharper taste. Iodine and anti-caking agents are added to the table salt to prevent the table salt from mixing with the water to keep it free. As a result, table salt does not mix well with fluid in our body either, and sodium and chloride are thus unable to perform their important functions.

No child labor is used in excavation and packaging.